This enormous pear shaped diamonds are later used as pendant of her Diamond Loop Tiara….this was her first version:

more about the jewels:

THE DAZZLING COLLECTION OF DORIS DUKE 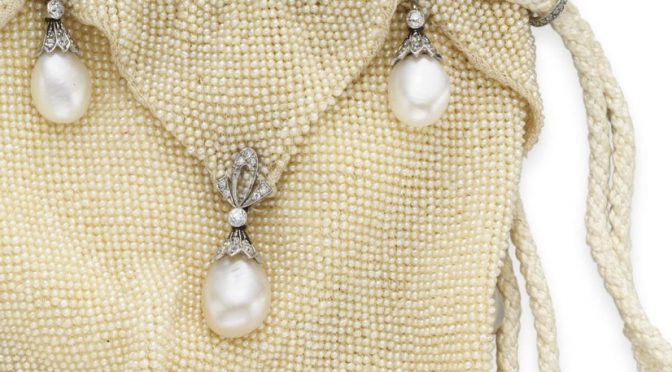 Florence Gould, a patron of the arts, died in her villa on the Mediterranean in 1983. She was 87 years old.

Mrs. Gould had moved to the villa after the death of her husband, Frank Jay Gould, in 1956. She was born in San Francisco, the daughter of Maximilien Lacaze, a French publisher who made his fortune in the United States. She interrupted her career as an opera singer in 1923 when she married Mr. Gould, who was the son of Jay Gould, the American railroad magnate.

When Florence J. Gould, a patron of the arts and daughter-in-law of the railroad magnate Jay Gould, was 80 years old, she packed most of her jewelry and went to Japan and Southeast Asia.

The necklaces, rings, bracelets, earrings, brooches and clips she took with her on that 1976 trip, jewelry now valued at about $8 million, will be auctioned next Wednesday at Christie’s.

“She let all the women in a geisha house try on her jewels,“ Daniel Wildenstein, the art dealer, recalled of an incident he witnessed as her companion on that journey. He was wary, he said, but Mrs. Gould was not, and “she was proven right – all the jewels came back.“

In Cambodia, Mrs. Gould, generously decked out in gems, traveled by elephant to see the temples of Angkor. On another occasion, Mrs. Gould, wearing rings on her fingers and jewels at her throat, rode off into the Cambodian jungle in a pedicab with only a guide.

“She was full of diamonds,“ Mr. Wildenstein recalled, adding that he feared for the safety of his friend and client.

“I was certain she’d never arrive alive. She wasn’t the least bit afraid. Of course, all was well.“ Mrs. Gould’s jewelry remained intact on that trip, and she wore most of it frequently at El Patio, her villa at Cannes, until her death at 87, a year ago. The bulk of the extraordinary jewelry holdings of the widow of Frank Jay Gould – he was Jay Gould’s youngest child and a real-estate tycoon who developed Juan-les- Pins on the Riviera – will be on view all this weekend and through next Tuesday at Christie’s, Park Avenue at 59th Street.

Not all of Mrs. Gould’s jewelry is in this sale – some pieces were sold earlier, and others were stolen. Following a 1978 theft at her estate, involving $1.4 million worth of jewels, Mrs. Gould spoke lightly of the loss. “She used to say, ‚Thank heaven, they only got my everyday jewelry,‘ “

John Young, a director of the Florence J. Gould Foundation, said, adding that the most valuable pieces stolen were a three-strand necklace of 97 pearls, worth almost $700,000, and an 85-pearl chain.

The purpose of the foundation, which benefits from most of Mrs. Gould’s $100 million estate, is to foster French-American amity. Mrs. Gould, who was born in San Francisco and studied opera before she became Mr. Gould’s third wife in 1923, died without heirs.

The star among the 87 offerings in the sale is a sapphire necklace valued at as much as $1.5 million. The design began as a simple necklace devised by Van Cleef & Arpels, using a spectacular 114.30-carat sapphire, “The Blue Princess,‘‚ with diamonds.
Mrs. Gould subsequently made “The Blue Princess“ the center of an assemblage of sapphires and diamonds, a necklace that she styled and Georges Bidault, a jeweler with a workshop outside Paris, fabricated.

Second only in value to the sapphire is the “Victory“ diamond, 31.35 carats, mounted as a ring, which was named for the Allied victory in World War II because the rough stone from which it was cut was discovered in Sierre Leone in 1945 at the end of the war.
The rough stone was the third- largest ever found in Africa. The ring is estimated to sell for up to $700,000.

Mrs. Gould had a passion for pearls, and more than one superb necklace remains.
A pearl and diamond fringe necklace by Alexander Reza, a Paris jeweler on the Place Vendome is estimated to sell for up to $300,000.
“If we had five of them, we could sell them all, so strong is the interest,“ Francois Curiel, Christie’s jewelry specialist, said. Mr. Reza also fashioned for Mrs. Gould an emerald-bead necklace of carved fluted stones, the size of marbles, which is estimated to bring up to $220,000.

She wore diamonds from head to toe – as Mr. Curiel discovered when he checked her closets and found a pair of diamond clips on her shoes. She wore fakes too – there are three fake diamonds, two fake sapphires and an ersatz emerald in the sale. The fakes and the fish – there are numerous fish-shape pins, crafted of sapphires and diamonds, and of ivory, diamonds and emeralds – are, according to Christie’s, attracting the most interest among lower-price offerings in the sale.

On April 12, 1984 her jewelry was sold  for $8 million, the highest price then ever reached at auction for a single collection of jewelry.

Jewelry that was owned by three other women who were prominent in their careers and as hostesses will be offered next week in three sales at Sotheby’s, York Avenue at 72d Street. Eleanor (Cissy) Medill Patterson, publisher of The Washington Herald until her death in 1948, was partial to the black-pearl necklace and earrings that will be sold next Thursday at 2 P.M.

Miss Patterson bought the string of 22 natural black pearls, separated by diamonds, with matching ear clips in 1934, when she saw them in the window at Cartier in New York.

According to an account in “Cissy,“ a biography of the publisher by Paul Healy, Cartier had just acquired the jewelry from Prince Youssoupoff, a Romanov, who told Jacques Cartier that two of the pearls had belonged to Catherine the Great.
Miss Patterson left the pearls to Evie Robert, a friend, who was a columnist, and whose daughter Alice Birney Robert Jones is the consignor. Sotheby’s expects the pearls will bring as much as $200,000.

Following the death in 1975 of Perle Mesta, the celebrated party giver who was Minister to Luxembourg under President Harry S. Truman, her jewelry was purchased by an antiques dealer, who sold it to a collector.
Now the collector, who has not been identified, is selling Mrs. Mesta’s suite of aquamarine and diamond jewelry, comprising a necklace, pendant, ear clips and brooch (up to $30,000), and an emerald and diamond brooch (up to $20,000). These will also be auctioned.

Thank you to Laura!

The then and now Mrs C.V. Whitney, Mary Lou Hosford, was robbed of $780 000 worth of Whitney jewels, heirlooms for the most part.
Emeralds, turquoise and diamond necklaces and sapphires and rubies.
It was the biggest crime story ever to hit Saratoga.

I hope she didn’t lose her wonderful and amazing wild roses tiara, which she wore on opening the Metropolitan Opera in NY.

It was not the ruby bandeau, of the Empress Sissi  (which I had on the picture to compare).
It was similar but not the same, it looks like more the earlier sketch made by Jeweler Köchert, see on top.

The daughter-in-law of Gertrude Vanderbilt Payne Whitney, sister of Gladys Moore Vanderbilt (1886–1965), who married Count László Széchenyi (1879–1938), which had very good connections to the imperial court of Vienna, so it could be absolutely true, it had an imperial history.

The story behind the diamond roses‘ tiara – of Marylou Vanderbilt Whitney…

The April 1898 announcement of George Vanderbilt’s engagement to Edith Stuyvesant Dresser was a leading topic in newspapers of the era. At age 36 and the only unmarried son from the famous American wealthy family of the  Vanderbilts.

The story behind the royal rubies and ruby jewels of Queen Alexandra of Great Britain:

The Important Emerald Sautoir of Cartier from Mrs Irving Berlin-Mackay>> Marriage Presents to the Heiress May Goelet | Duchess of Roxburghe

In 1856 the crown jeweler Bapst created a comb for Empress Eugenie using diamonds from the French crown jewels. The head ornament had nine long diamond pendants called pampilles or aiquillettes.

At the auction of the French crown jewels in 1887, Tiffany’s bought four pampilles and sold two of them to Junius Spencer Morgan, the wealthy patriarch of the renowned merchant banking family.

He put these 2 pampilles in the safe with this order:

The contents of this box „2 diamond pendants from the Crown Jewels of France“ as described in the papers which accompany them are the property of my daughter Mary Ethel Burns.

They were handed to me by her Grandfather on the 29th June 20/88 to be held in Trust for her.

It was an exquisite and amazing present to his granddaughter May Burns.
She remounted the pampilles and the twenty-eight diamonds into a fringe necklace. It is said that the old-mine cut diamonds are I to J in colour, SI to I1 clarity in lively brilliance.

More History, the story behind the Royal and imperial Jewel

Sketch of The Harcourt – Emeralds, Necklace and Tiara

The Harcourt Tiara made by Boucheron old & new version

The Harcourt – Diamond Necklace from the French Crown Jewels

NEW updated!
The historic Dowager Viscountess Harcourt Diamond Necklace went to Tiffany & Co., on auction in October 2015, who first purchased the 28 diamonds on the necklace at the 1887 French Crown Jewels auction in Paris. US$1,548,718 / CHF 1,505,959 Source:Sotheby’s;