The then and now Mrs C.V. Whitney, Mary Lou Hosford, was robbed of $780 000 worth of Whitney jewels, heirlooms for the most part.
Emeralds, turquoise and diamond necklaces and sapphires and rubies.
It was the biggest crime story ever to hit Saratoga.

I hope she didn’t lose her wonderful and amazing wild roses tiara, which she wore on opening the Metropolitan Opera in NY.

It was not the ruby bandeau, of the Empress Sissi  (which I had on the picture to compare).
It was similar but not the same, it looks like more the earlier sketch made by Jeweler Köchert, see on top.

The daughter-in-law of Gertrude Vanderbilt Payne Whitney, sister of Gladys Moore Vanderbilt (1886–1965), who married Count László Széchenyi (1879–1938), which had very good connections to the imperial court of Vienna, so it could be absolutely true, it had an imperial history.

The story behind the diamond roses‘ tiara – of Marylou Vanderbilt Whitney… 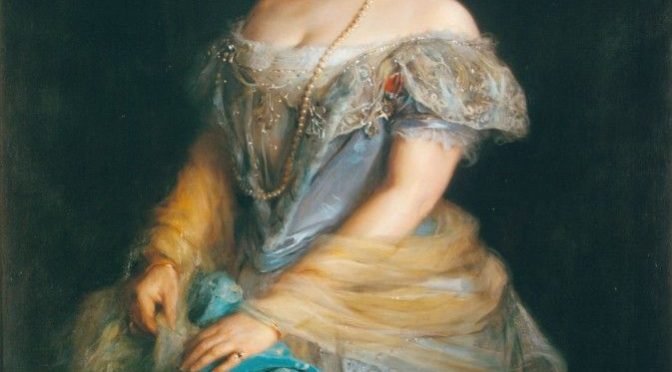 The history about the historic tiara of the Duchess of Ratibor-Corvey :

Heart shaped diamond Ornament Tiara Marie Duchess of Ratibor-Corvey Large diadem with palmette in heart-shaped elements with diamonds. As base a double diamond hoop with large solitaires, in between leaf-shaped small motifs, lily-shaped, between the large elements.
The gallery set in gold. All motifs are wearable as brooches Jeweler Kobert Vienna 1860.

The Diamond brooch, made in the late 19th century is designed as a crescent moon. more about the diamond brooch>>

The diamond and ruby parure was made by the austria court jeweler Koechert. It was part of her wedding presents,  later owned by the Duchess of Wurtemberg, Diana of France.

In the orginal version of 2009, it was not known which was the presenter of that costly jewelry – now the update:

Another wedding gift to the Duchess Maria Immaculata  was this important ruby jewel:

Entry into Vienna – 23 April – Her Royal Highnesses the Serenest Bride Princess Elisabeth of Wittelsbach  and Duchess Louise in Bavaria. Her Royal Highness the Princess wore a round pink atlas dress with a white surface, a lace sash around her neck, a diadem of diamonds in her hair, surrounded by a wreath of white and red roses.

On the day of her marriage, April 24, 1854, Sisi wore a white silk dress Moire antique, with rich embroidery in gold and silver, and a long, gold-embroidered court train, which was fixed as an independent element over the dress.
Waist and sleeves were richly decorated with silver blondes. A precious veil of Brussels waved down from the beautiful hair of the most garish princess.
This train, at the top of the picture, was kept as a special memento of Sisi’s favourite daughter Archduchess Marie Valérie and could be purchased in 1989 from the descendants of the Archduchess for the wardrobe depot.

The wedding dress was donated after the wedding to the pilgrimage basilica Maria Taferl and is now exhibited in its treasure chamber in the form of a messcoat.

The golden wedding jewellery of Empress Elisabeth is a sumptuous floral wreath made of gold spun as hair jewellery, a chest buckle and two combs (the horn part of the combs can be seen in the upper picture), which were stuck into the hair behind the ear and thus also served as ear jewellery.

The bridal jewellery was donated by Prince Konrad of Bavaria to the pilgrimage chapel Altötting, the youngest son of Gisela and grandson of the empress, who mentioned that both his mother Gisela (on the occasion of her marriage to Leopold of Bavaria) and his grandmother Sisi (on 24 April 1854 in the Augustinian Church in Vienna) wore this bridal jewellery.

Unfortunately there is no clear wedding picture of the two marriages, so Elisabeth as the bride was not decorated with precious jewellery as one would have expected from an empress, but with this rather simple bridal wreath made of gold.

Her dowry amounted to 50,000 gulden in cash, and her dowry list also included jewellery, precious objects and jewellery, gold utensils, jewellery, silver and of course wardrobe worth 70,000 gulden, but was very modest for a future empress.

In addition there was a diamond tiara, an attention of her husband to the value of 100,000 gulden. In return, however, she was asked to sign a clause in her marriage contract stating that her Bavarian relatives were not entitled to the inheritance – which, according to tradition, the empress did hesitantly and weeping. „Sisis“ annual Apanage amounted to 100,000 gulden (that of the Empress Mother 50,000 gulden).

In the official festive programme, the bridal jewellery was wrongly described as follows: The bridal wreath, wound from fresh myrtle and orange blossom, was held by a splendid diamond tiara worn by Her Imperial Highness Archduchess Sophie on Her Majesty’s Day. On the shoulders precious brilliant-cut diamonds held the coat…..there was no coat on the pictures – but the train.

On the evening of 26 April, the Court Opera Theatre offered the magnificent sight of a glittering feast. The cream of all the awards that the higher circles of the Residence had received, and the tickets that were issued, was gathered in the evening and competed in the shine of diamonds and pearls, order stars and uniforms Her Majesty the Empress a light blue silk dress with white echarpe and a pink diamond-studded wreath in her hair.

Court Ball at the Wedding – The highest and most distinguished guests of Her Majesties were invited to this magnificent feast, which took place on 27 April in the Imperial and Royal Hall of Knights. The most beautiful wreath of our noble ladies adorned the ballroom, the wealth and splendour of the toilets, which shone with jewels and flowers, the manifold uniforms of the diplomatic corps embroidered with gold and silver, the civil servants and the generality, with the shining signs of their glory and their merits, offered a magnificent sight. Wherever the eye looked, brilliant-cut diamonds and precious stones of the most precious kind shone.

Which of the different star set is in the possession of her mother Archduchess Maria Beatrice of Austria-Este or the family?

A selection of the known diamond stars:

The jewellers Bapst, used four large emeralds bought by Louis XVIII and diamonds from the Crown collections. Under the Second Empire, the tiara was worn by Empress Eugenie, who particularly appreciated emeralds.

Then it was offered with the other crown jewels in 1887, as lot Nr 27 for 50 000 frs, when the jeweler Messrs. A. Bachruch bought it for 45 900 frs, on behalf of the wealth Austrian-Hungarian magnate Count Mano Andrassy  more than 67 years it was in the treasure of the Andrassy…

April 1918, it was still wartime – the imperial gift had to be correspondingly practical. The diadem could be divided into five brooches and was precious and noble for the post-war period with over 40 carats of diamonds, the bride’s mother had also signed over to Archduchess Hedwig, Countess Stolberg-Stolberg,Schloss Kühtai.
Even the celebration at Schloss Wallsee was only in the closest family circle…..