Maria Antonia Duchess of Parma, Infanta of Portugal. On 15 October 1884 at Schloss Fischorn, Maria Antonia married Robert I, Duke of Parma as his second wife. She was the mother of Empress Zita.⁣ 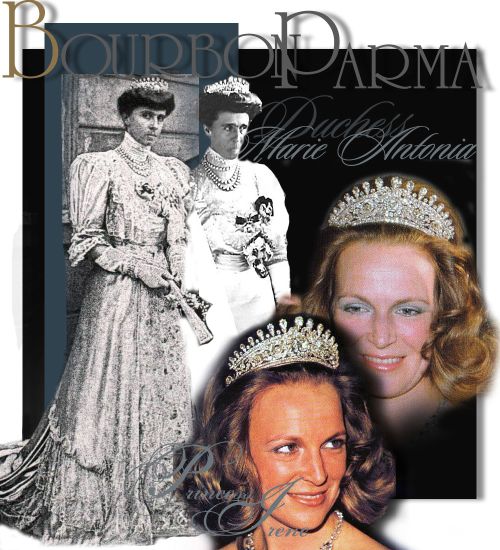 She is pictured with one of my favorite diamond tiaras.⁣
Princess Irene of the Netherlands, did also wear the beautiful diamond Bourbon-Parma-Tiara, of the family of her husband. Some diamonds of the tiara are from the Duchess of Angoulême, daughter of Louis XVI and Marie-Antoinette, she left France in 1830 to Austria. It is said that the tiara was made in Vienna – probably by the court jeweler Köchert, like an older tiara once owned by the Duchess built in style of the XIX siecle by the jeweller of the French crown. The centerpiece is changeable.⁣
⁣
This tiara belonged to the Bourbon-Parma family and had been deposed to a lawyer in Paris. Unfortunately it seems to have been lost actually since 1996. The Parma Tiara was trusted, at that time, to an attorney office in the late 90s by Princess Marie-Cécilie of Bourbon-Parma, while succession procedures took place. Mysteriously the tiara „got lost“ and the attorney office had to pay € 3.022.500 to the Bourbon-Parma family.⁣
⁣
More history:⁣

Princess Irene of the Netherlands, Duchess of Parma

The bride was gifted with a diamond tiara from Archduke and Archduchess Rainer, ( the generous childless pair Archduke Rainer of Austria 1827-1913 wife Archduchess Marie of Austria the couple was probably the most popular amongst the Habsburg family )with swags of diamond, on top with bow and ribbons – a cluster was set above on each garland. Other precious presents see in the link.⁣⁣⁣⁣
⁣⁣⁣⁣
In the afternoon, a tea was served at the Grand Hotel by the Count and Countess of Eu: the Duke of Chartres, the Princes Dom Pedro and Dom Antonio of Orleans and Braganza, the Count and Countess of Caserta the Duke of Calabria Jnfant Don Carlos of Spain Princess Louise of France, Prince and Princess Johann Georg of Saxony, Grand Duchess Mother Anastasia Michailowna of Mecklenburg-Schwerin and so on….

The story behind royal jewels…. Royal Marriage of Prince Felix of Bourbon-Parma and Grand Duchess Charlotte of Luxembourg

The history of the imperial jewels