The motif surmounting the central sapphire is a Roman Helmet, alluding to Napoleon’s wish to associate himself with the great rulers of the Roman Empire.

Other emblems, including two crossed canons, a drum and lances demonstrate further Napoleon’s desire to represent military strength.
To the right of the central sapphire is a monogram depicting a ‘WN’ entwined, alluding to the Emperor and the Countess Waleska.
It is believed that the ruby-eyed eagle, surmounting the piece represents the Imperial Eagle.
However, it is not depicted in the usual proud stance, instead it is a recumbent eagle, considered to provide a form of protection to the rest of the jewel, and therefore to the person it is given to.

The story behind the jewel, more history:

From the jewelry collection of DAME NELLIE MELBA 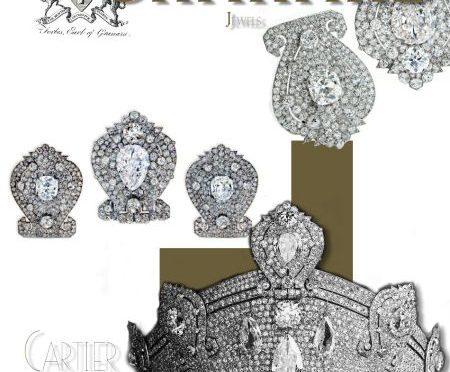 The diadem was designed by the court jeweler Duval in St Petersburg in 1825, see design drawing in the link – and also produced.
Originally, 16 acacia branches set with diamonds were to be arranged as ornaments, as provided in the design. In the original, however, it was much more.
Alternating with this, flower ornaments with diamonds and a sapphire and 2 diamond roses were placed in the diadem.

The „S“-shaped diamond volutes connect the different ornaments with each other.
The base ring consisted of 9 sapphires framed by diamonds and alternating four diamond intermediate parts.
The center of the tiara consists of two sapphires. A crescent-shaped cabochon sapphire and an oval sapphire together form a rosette.
The diadem was originally designed as a Kokoshnik, then as a Coronet crown.

This sapphire jewellery was made for the decoration of the Maria Pavlovna Romanova, Grand Duchess of Russia Мария Павловна Романова, at the same time as the Trousseau of her sister Grand Duchess Anna Pavlovna, later Queen of the Netherlands.

The story behind the royal jewel, click for more history:

Princess Alexandra of Saxe-Coburg and Gotha (1878-1942) Princess of Hohenlohe-Langenburg.

The hereditary princess of Hohenlohe-Langenburg is pictured above, with a diamond fleur de Lys brooch.

She wore the brooch first after her engagement, which was a secret in May of the year and later for public in September 1895.
Her grandmother Queen Victoria was not amused.