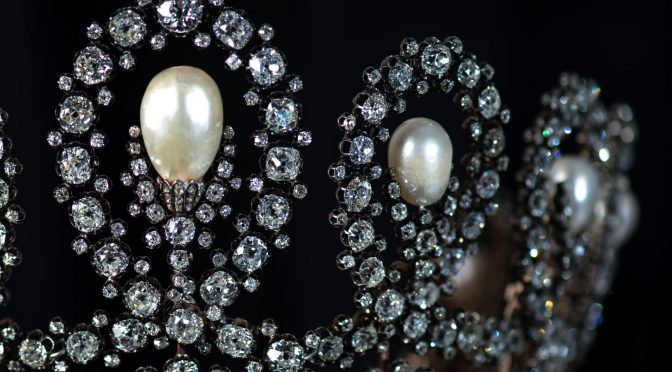 more about the history of the royal jewel:

PROVENANCE OF THE IMPERIAL SAPPHIRE PARURE

A cord in writing, found between the boxes of jewels, stated that these sapphire jewels were given to Grand Duchess Stephanie of Baden, by her cousin Hortense de Beauharnais, Queen of Holland.

Such an origin is very likely. In many paintings Queen Hortense of Holland, and her mother Empress Josephine, can be seen wearing precious belts. Furthermore, Hortense’s financial papers, which are kept in the Napoléon archive in Paris, give evidence of her fortune between 1817 and 1837, the year she passed away. They show that she left Paris in 1816 with little money, but a lot of jewellery.

See at the coronation picture, the sisters of Napoleon Caroline, Pauline, Elise and Hortense are in court gown with „jeweled belts“ and „bandeau head ornaments“ also stetted with large pins of precious centers, like the brooches and pins.

Under Napoléon’s court, belts decorated with precious stones were part of any jewellery parure, as fashion dictated that the waist was very high on dresses and court ladies needed a belt which was placed just under the décolleté. More about the history:

More about Princess Marie d’Orleans wedding gifts from her mother