The late Queen of Prussia and German Empress: Auguste Victoria zu Schleswig-Holstein-Sonderburg-Augustenburg as Royal Bride wearing on of the royal bridal-coronet

From Franck „History of Famous Jewels and Collections“ board :
This list was only made from a juridical point of view following the information we have in our possession. Obviously, we do not have access to the protocol of divorce.

Nevertheless, it is logical that, jewels given by British Royal Family or as « Princess of Wales » would be kept, according to tradition within the Royal family.

“During her lifetime, Diana will keep the jewelry and family heirlooms she was given as Princess of Wales, but, according to tradition, they will be passed down and kept within the royal family ».

I. Jewels return to the vault (Queen Elizabeth II):

II. Jewels worn by the Duchess of Cornwall:

a. The Prince of Wales feathers’ diamond and emerald pendant (engagement present from Queen Elizabeth the Queen Mother – Return to the vault and maybe worn by the Duchess of Cornwall)

III. Jewels worn by the Duchess of Cambridge:

IV. Jewels worn by the Duchess of Sussex:

V. Jewels given by princess Diana during her life :

a. A sapphire and gold necklace with the Prince of Wales feathers as a pendant from the National Association of Goldsmiths and designed by Lexi Dick; earrings to match (Wedding gift);
b. A gold and cross necklace (for a charity Event in September 1997 Canceled)

VI. Jewels on loan (Not including from Queen Elizabeth II and her mother) :

a. The Spencer tiara;
b. The swan Lake pearl and diamond necklace + earrings;
c. A large amethyst and diamond cross pendant (a loan from Garrard);

VII. Jewels unworn and certainly/maybe inherited by her children:


a. Wedding gifts:
i. The Saudi Arabian diamond and sapphire suite;
ii. The Gold choker with pearl fringe and multi-gemstone necklace from the Crown Prince and Crown Princess of Jordan (Including a central emerald, turquoise, amethyst, coral, pearl and diamond);
iii. A set of jewellery crafted from coral and gold from the heir Apparent of the State of Qatar;
iv. A diamond watch (Lady Kalla watch);
v. A five-row pearl bracelet with a diamond flower clasp (wedding gift from the UAE) + a pearl necklace with a sapphire clasp;

b. Personal gifts:
i. The double strand pearl, gold and diamond bead necklace with a central diamond heart (bought by Princess Diana in 1982);
ii. A diamond flower brooch (Gift from her friend Adrian Ward-Jackson);
iii. A jade necklace and earrings from the oil Tycoon Armand Hammer (never worn in public);

c. Officials’ gifts given in UK (personal, further to the divorce’s settlement:

i. A necklace with a centrals stone – The necklace has no stones but raw gold (gold nuggets?) in a gold frame hanging from a blue silk cord. -ship launching present – The present was paid by Wärtsilä shipbuilding company, made by Tillander and given by the president (never worn in public) + a bracelet (Information from Margot);
ii. A sapphire and diamond watch (gift, which was presented to her at the 1983 International Spring Fair in Birmingham;

d. Gifts or loan with unknown provenance:
i. The graduated diamond flower cluster necklace (mostly on loan from Queen Elizabeth II );
ii. The six-row pearl choker with a large pearl surrounded by diamond + earrings (mostly on loan from Queen Elizabeth II );
iii. A seven-strand pearl choker with diamond and ruby spacers;
iv. Ruby and diamond necklace worn only once in Venice;
v. An amethyst and diamond demi-suite;
vi. Aquamarine and diamond demi-parure (comprising dangle earrings and a bracelet);
vii. An aquamarine and pearl bracelet;
viii. Gold earrings bought during her life;

Thank you to Franck! 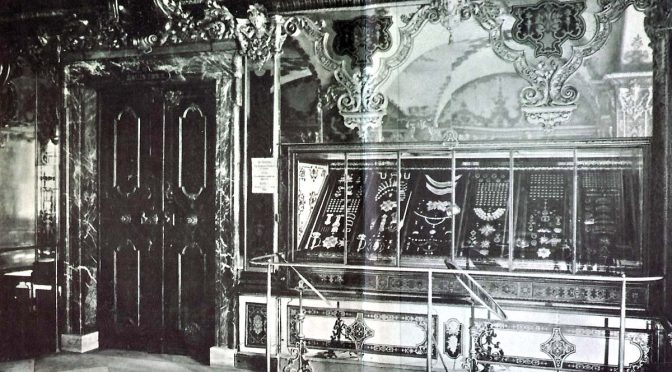 A sixth urgent suspect has been arrested today in connection with the burglary of the Historic Green Vault in November 2019.

The Dresden public prosecutor’s office accuses the accused of aggravated gang theft and arson, among other things.

The accused is to be brought before the investigating judge in Dresden later today.

The public prosecutor’s office assumes that all six persons who were directly involved in the burglary of the Historic Green Vault have been identified. Furthermore, the investigations – also into the whereabouts of the stolen art treasures – are continuing. Due to the scope and complexity of the case, they will take a considerable amount of time.

Princess Katharina Bagration pictured with a large cluster and diamond shoulder brooch, in the size of the center stone – in the spinel diamond comb of her spinel and diamond parure.

Probably she could change the stones and the spinel are wearable as single brooch. 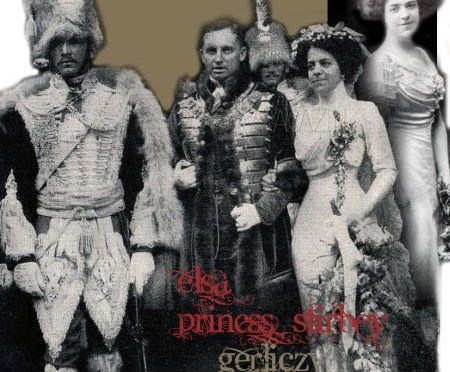