The motif surmounting the central sapphire is a Roman Helmet, alluding to Napoleon’s wish to associate himself with the great rulers of the Roman Empire.

Other emblems, including two crossed canons, a drum and lances demonstrate further Napoleon’s desire to represent military strength.
To the right of the central sapphire is a monogram depicting a ‘WN’ entwined, alluding to the Emperor and the Countess Waleska.
It is believed that the ruby-eyed eagle, surmounting the piece represents the Imperial Eagle.
However, it is not depicted in the usual proud stance, instead it is a recumbent eagle, considered to provide a form of protection to the rest of the jewel, and therefore to the person it is given to.

The story behind the jewel, more history:

The Duchess was pictured, with the royal tiara, only one time in 1893, see above, and give it later to her daughter Princess Patricia of Connaught.

In 1911, the Duke was appointed Governor General of Canada. Princess Patricia accompanied her parents to Canada, and she became popular there, on those occasion she wore her mothers wedding gift, the Indian diamond tiara as stomacher, without the center, of a movable ornament like a sarpech on top, with hanging emerald drop.

Sarpech, also known as an aigrette is a turban ornament that was worn by significant Hindu and Muslim princes.

She had her own jewels and tiaras for royal events, because , her mother’s precarious health meant the unmarried Patricia often step in for her mother, as vice-regal hostess, especially during the Duke of Connaught’s tenure as Canada’s governor general from 1911 to 1916.

A parure of sapphire and diamond tiara, sapphire necklace, sapphire stomacher, sapphire earrings and two sapphire bracelets that the Duchess of Cambridge, Queen Mary’s grandmother, gave to her eldest daughter Augusta in 1843 when she married the Grand Duke of Mecklenburg-Strelitz.

More about the story of the important Cambridge Sapphires>> 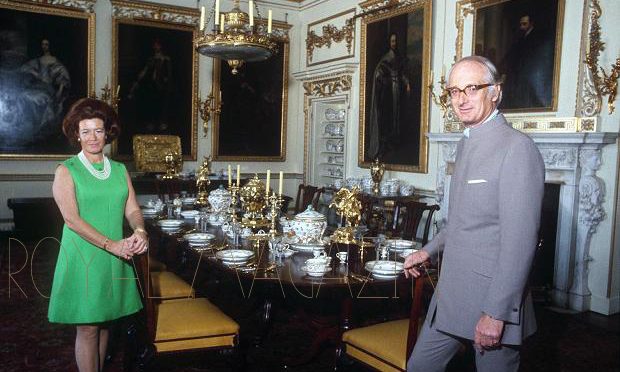 Every famous jewel had a story, more about the Pearls |Duchess of Bedford Marchioness of Tavistock Historic Jewels