The Most Famous Jewelry Gifts and the Stories Behind Them

This diamond and emerald bracelet with an large octagonal emerald in the center, framed of an octagonal diamond border, is made in diamond trellis-work.

From her jewel album, we see on the kokoshnik eight diamond buttons as center of the stars, a sautoir – link chain in diamond as frame on the kokoshnik from the Empress Dowager Marie Feodorovna, and the hanging 4-rows of pearls with a large sapphire and diamond clasp(not seen) from the Emperor and Empress of Russia.

The pearl choker on her neck is also with a matching clasp, a cluster with sapphire cabochon and double row of diamonds.

On top an four pedal clover on large diamonds, a earlier present of the groom.

In front of her gown are also diamond buttons from the grooms mother Empress Olga Feodorovna, in total 16 in two sizes. On the head we could see a link chain in large diamond, probably the present of Empress Dowager Marie Feodorovna.

The ruby and diamond stomacher is an heirloom of Grand Duchess Olga Feodorovna Romanov, she left it to her son Grand Duke Georg Mihailovich.

This enormous pear shaped diamonds are later used as pendant of her Diamond Loop Tiara….this was her first version:

The stories behind the famous jewels of Nancy Leeds

Find out more about the jewelry of the Countess of Flanders… 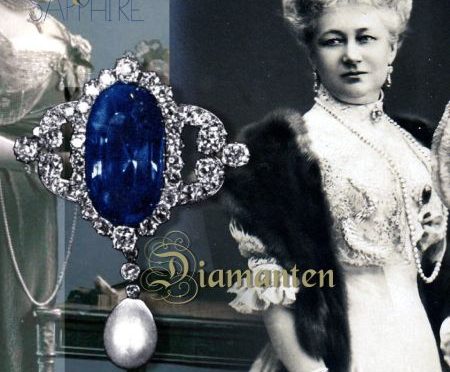 Auguste Viktoria Friederike Luise Feodora Jenny of Schleswig-Holstein-Sonderburg-Augustenburg was the wife of Emperor Wilhelm II and as such from 1888 to 1918 German Empress and Queen of Prussia.

The empress often wore this large oval diamond brooch and Devante de Corsage and was shown in different pictures. The large faceted oval sapphire is framed by 20 evenly sized diamonds and two larger diamonds on the short lengths. A large, even pearl hangs movable on the brooch with an eyelet and three diamonds. There are flourishes made of diamonds on both sides.

The story behind the historic jewels of the Empress of Germany – the original jewel, a diamond stomacher and necklace once the gift from Sultan Abdul Hamid to the Empress Auguste Victoria.

The trousseau of Miss Lilias Borthwick, of which we had a glimpse yesterday, is the perfection of dainty simplicity| November 1893

The gown both for day and evening wear depend on for their effect their perfect cut, rather than on costliness of material. The trousseau includes several useful tailor-built gowns, one of navy serge with open jacket worn over a fawn-coloured Tattersall vest; another of gendarme blue home-spun, and third of brown-fleoked Scotch tweed, which is being made near the bride’s Highland home by a lady who enjoys the patronage of Royalty, was specially charmed with Cuttle Russian coat of gendarme blue cloth, with big square collar and revers sable and quaint strap fastenings on the bodice. The basque was attached to a ribbon belt fastened with buckle of oxidized silver. Cozy wrap of fawnooloured serge was lined through with gray squirrel fur and bordered with soft brown bear fur. The high collar was cut in one with the cloak.

Quaint Spanish buttons of old silver were used on the bodice of useful little gown black diagonal with bands of crimson velvet the skirt and a crimson velvet vest.

For her wedding journey tho Isle of Wight the future Lady Bathurst has selected dress and coat of brown hopsack tweed. The skirt has border of mink and a band petunia-coloured mirror velvet covered with brown passementerie. The bodice has square yoke back and front of the petunia velvet, edged with passementerie. Both coat and skirt are lined with petunia-red shot silk. A large picture hat of brown velvet with plumes of ostrich tips on the left side is to be worn with the dress. Most the future Countess Bathurst’s evening gowns are guiltless of trains, these appendages not being much approved by the sensible and practical young lady.

Among these gowns is a charming dinner dress of white silk, powdered with tiny pink flowers. The hem flounce is run on green and pink baby ribbon, which is knotted here and there, and the bodice and Empire sash are trimmed with gold enamel trimming. A dainty gown of blue moiré has the skirt trimmed with donkey ear bows blue velvet and bands of velvet covered with passementerie of white and colored pearls, the bands forming deep point in front. Another evening dress of de Nil armor silk, with a double flounce of embroidered chiffon arranged pagoda-wise the skirt.

A very pretty Whatteau tea gown in light yellow, has points caught with a rosette on the train and the slight train falls from 8 rosettes between the shoulders. A charming little tea gown in rise pink Lilac silk has full front the silk circled with a quaint chain girdle and clasps of oxidized silver. Dainty dressing gowns, heaps of pretty lingerie, and a variety of headgear were among the wedding finer v displayed in the young bride’s pretty sitting room near the top of Sir Algernon’s high house in Piccadilly, the windows which command magnificent view over the green park.

Above in the picture: Lilias, Countess Bathurst

Made from  old and rose-cut diamonds, silver and gold, (circa 1910) the stones were taken from two tiaras,  Countess Bathurst inherited from her mother Lady Glenesk.

The tiara and the preceding corsage brooch, is the epitome of aristocratic splendor and the delicate Belle Époque scrolling motifs were inspired by 18th century architectural details.

Compared to many Victorian tiaras with their often heavy style of mounting and high surmounts this early 20th century example must have felt comparatively ethereal, and it is not surprising that Gloria Bathurst clearly enjoyed wearing it and was photographed wearing this beautiful head ornament on various grand occasions.